Almost every wholesale bakery has an interesting story about how it was founded and how it grew from humble beginnings into a national supplier of bakery foods. However, it is safe to say that no bakery has a story similar to Father Sam’s Bakery, Buffalo, NY. Father Sam’s did not catch its big break through local bake sales or at a popular retail bakery. Instead, Father Sam’s Bakery built its foundation and customer base at the most unlikely of places: Church. Almost 27 years ago, Albert Sam, an Episcopalian minister and founder of Father Sam’s Bakery, Asked his Bishop for permission to serve Syrian flatbread at communion. The Bishop agreed, and So began the story of Father Sam’s Bakery. Since then, Father Sam’s has built itself a 40,000 sq. ft. automated wholesale bakery to produce Its line of pocket breads, and expanded its customer base to almost all points east of the Mississippi River. Most recently, the company recognized the immense business opportunity to supply tortillas to the East Coast market. With a diverse line of products in its portfolio, Father Sam’s has set out to Become the one-stop source for flatbreads on the East Coast.

How do I use this?

Throughout its almost 30 year history, Father Sam’s has dealt with one constant issue: educating people on how to use its unique style of pocket bread. Although still considered a flatbread, the company’s pocket bread is anything but flat, and this provides it with a unique point of distinction. In its original size, Father Sam’s pocket bread reached 9 ins. In diameter. Although normal for Albert Sam and his family, the large pocket bread was a tough sell to American consumers who were not used to the size or thickness of the bread. “I knew that either we were going to need an awful lot of money to educate people on how to use our traditional style of bread, or we needed to come up with some kind of Americanized pita,” Samuel Sam, Albert Sam’s son and Father Sam’s vice president, says. Albert Sam’s other son, William Sam, is president of Father Sam’s. Father Sam’s quest to create an “Americanized pita” led to a simple solution: smaller products. By decreasing the size of its pocket bread, Father Sam’s provided the market with a unique product that consumers accepted. 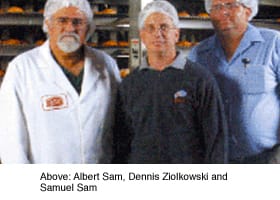 As Father Sam’s unique line of pocket breads gained acceptability and sales, the company’s physical structure grew from a 1,500 sq. ft. garage, to a 25,000 sq. ft. facility in Tonawanda, N.Y., to its current 40,000 sq. ft. plant in Buffalo. The company’s 1996 move to the Buffalo facility signified a dramatic change in the company’s operations. With the new facility, Father Sam’s embarked upon the task of completely automating the processing of its pocket breads. However, because the company was producing a unique product, there was no manual on the proper way to construct an automated line that would accommodate Father Sam’s products. “No one makes bread like we do, especially on a commercial level,” Samuel Sam says. “The process had to be developed.” To help it automate the manufacturing of its products, Father Sam’s relied on the ingenuity of equipment manufacturers. To construct its main line, the company enlisted the services of a manufacturer of tortilla processing equipment. Although the manufacturing of pocket breads is similar to tortillas, a few significant differences prohibited Father Sam’s from installing a standard tortilla line. At the front end, the pocket bread line closely resembles a regular tortilla line. A KB Systems ingredient handling system conveys flour from a 75,000 lb. silo into two spiral arm mixers. A Werner & Pfleiderer eight pocket divider/rounder prepares dough pieces for proofing. Proofing products represents the most significant difference between tortilla production and the production of Father Sam’s products. “We’re proofing 20 or 30 times longer than a tortilla, so we had to install a monster proof box,” Samuel Sam says. The proofer, which stands almost 30 ft. in height, proofs products for an hour at temperatures of about 104 degrees F. Father Sam’s also had to install a lubrication system on its proofer to achieve proper release of its pocket breads, which have a high moisture content. To accomplish this, Father Sam’s worked with an equipment supplier to develop an oiling system that would dip the proofer trays in vegetable oil before accepting the dough from the rounder. 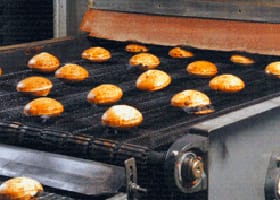 After proofing, a pressing system forms dough balls into the circular pocket bread shape. When installing the pocket bread line, one of Father Sam’s toughest decisions was choosing what kind of forming system--sheeting, die-cut or pressing--to use to shape its products. “We chose to press our products because it creates a more homemade product,” Albert Sam says. “It’s (pressing) not the most practical or efficient way to make product, but it makes a whole different kind of product.” Dough balls are pressed twice, which seals the dough’s pores, Samuel Sam says. After pressing, products travel through an impingement oven that bakes the products at 700 degrees F for about a minute. The company uses an impingement oven because its fast bake times allow products to retain their moisture. Besides its main pocket bread line, Father Sam’s also operates a second pocket bread line, which produces its rectangular-shaped pocket bread. In addition to its round and rectangular products, Father Sam's line of pocket breads also contains a variety of sizes and flavors. Although pocket breads provided Father Sam’s with its core base of customers and its ability to grow, the company is relying on tortillas to promote future growth.

“We started to realize that if we were going to grow, we needed to become specialists in the flatbread category,” Albert Sam says. “And this part of the country is really open to the expansion of the tortilla market.” Although Father Sam’s was experienced in producing flatbread products, the marketing and selling of tortillas exposed a problem that the company had never dealt with in its history. “We never had a competitor in the pocket bread business as far as we were concerned—we were different enough,” Glenn Povitz, Father Sam’s vice president of sales, says. “When we went into the tortilla business, it was just the opposite.” However, Father Sam’s possessed two advantages that allowed its tortilla initiative to succeed. The company’s first advantage was that East Coast consumers and retailers were relatively unexposed to the tortilla market. “The East Coast is probably 15 years behind California when it comes to people’s acceptance of tortilla products,” Samuel Sam says. Because the company entered the east Coast tortilla market during its infancy, it has been able to capitalize on growing consumer acceptance of these ethnic products. The company’s second advantage was its already established pocket bread customer base. Instead of selling new products to new customers, “we just had to go in to supermarkets and convince them to spend more money than they currently were,” Povitz states.

Unlike the pocket bread line, which had to be customized to handle Father Sam’s products, the company’s tortilla line resembles a standard production system. However, that does not mean that Father Sam’s produces standard tortillas. When entering the tortilla market, Samuel Sam defined two problems that negatively affected a consumer’s eating experience. “First, a lot of product was being wasted due to the tortillas splitting when people were making sandwiches. Secondly, almost always at the end of the day, no one would ever close the package properly, so you had stales,” Samuel Sam says. To rectify the splitting problem, Father Sam’s formulates its tortilla products with a high level of shortening, which allows consumers to “scrunch up a tortilla without it flaking all over the place,” Samuel Sam says. To decrease the potential for stale products, Father Sam’s packages its tortillas in resealable bags. The company also says it uses a thicker than normal polyethylene bag that keeps the freshness in, and air out. Although these measures add costs to the production process, Father Sam’s deems it necessary to distinguish its tortilla products from its competitors. “It was a big move emotionally and psychologically, because these were high-class, expensive packages,” Albert Sam says. “Our bags were going to double in cost, and we were going to have to buy more equipment.” However, the company realized that manufacturing a quality tortilla was more important than offering the market a product that was less than satisfactory. The company states that its packaging measures have allowed it to extend the shelf life of its products to 60 days at room temperatures, without adding chemicals. 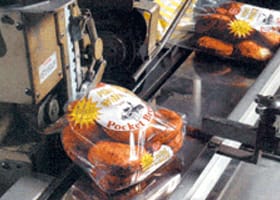 Although Father Sam’s was founded and has thrived through the production of its pocket breads, the company’s tortilla products are currently outpacing the pocket breads in terms of annual sales growth. “Both of our products’ sales are growing, but our tortilla business is growing 20% or more annually,” Povitz says. Anchoring this growth is Father Sam’s line of flavored tortillas. Unlike some flavored tortillas on the market, Father Sam’s spinach-flavored tortillas are not green. Nor are its pesto-flavored tortillas red. Instead, Father Sam’s flavored tortillas closely resemble their unflavored counterparts, with only minor specks of flavored ingredients seen on the surface of the tortilla. The company’s flavored tortillas appear this way because the company takes great care to use real ingredients to flavor its products, instead of a flavor compound or chemical. “We use real spinach,” Samuel Sam avers. “The flavor is good, but there is no coloration in the tortilla because it does not wash out during mixing. We figured that green was not a good food color outside of produce.” To ensure that its flavored tortillas show no coloration, Father Sam’s introduces its flavored ingredients towards the end of the mixing cycle. “We put the flavored ingredients in the mixer at a time where they maintain their flavor but don’t get diluted,” Samuel Sam says. “They are added during the mixing process, but not as a raw ingredient in the initial mix.” With the recent success of its tortilla business, Albert Sam says the company is prepared to take on a larger share of the East Coast tortilla market. “Our strategy in the last year and a half was to grow pocket bread sales and show people that we have tortillas,” Albert Sam states. “Now, we’re ready to really go out there and sell tortillas.” Not a bad strategy for a one-time regional baker that is now expanding its business to all points east of the Mississippi River.